You are here: Home / Technology / Alignment and Overlay

Canon Nanotechnologies imprint systems use a field-by-field alignment process in which alignment marks, typically located at the four corners of the field on both the wafer and mask, form a set of Moiré interferometric fringes. The detection of these fringes and the subsequent alignment corrections are achieved using three critical and separate sub-systems as follows:

Interferometric Moiré Alignment Technique (i-MAT):The Moiré alignment is capable of single point alignment accuracy well below 1nm. In operation, the i-MAT sub-system cameras view real-time Moiré signals that provide relative displacement errors between grating marks on the imprint mask and corresponding grating marks on the wafer. The figure to the right schematically illustrates field-by-field alignment based on eight alignment cameras and eight sets of grating patterns on the imprint mask and wafer. Critical alignment corrections occur while the mask is in contact with the liquid (resist) and as the resist is filling the relief images in the imprint mask. Using real-time data obtained from the iMAT camera system, the stepper calculates and then makes adjustments to the relative positions of the mask and wafer multiple times per second, using the following sub-systems: 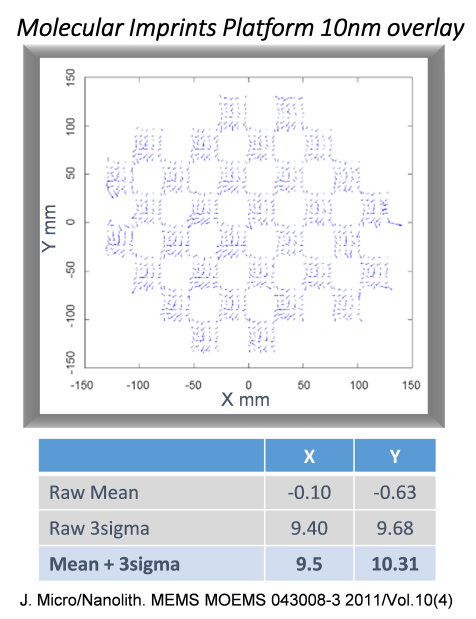